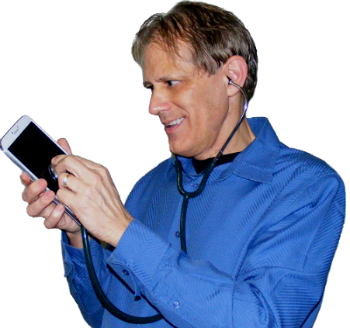 In the mid-1990’s, I was working in Ft. Worth, TX in a warehouse for the Defense industry. The Iron Curtain had fallen, the economy was heading into recession, and fortunately I began to figure out that my job wasn’t quite so stable anymore. Besides, this wasn’t really where I wanted to spend the rest of my career. So I quit my full-time job, got a part-time job, and enrolled in college. Since I had lost both parents by the time I was 20, I didn’t have anyone to fall back on. So after earning a two-year Business degree, I got a job at a local hospital, again in the warehouse or as it’s known in hospitals; Central Supply. On the surface, it looked like I had just made a lateral move that wasn’t much better than the job I had left two years earlier. However, this time I knew I was placing myself in an industry that has connections that reach into so many more areas. I thought about studying to be a Surgical Tech or other clinical role until I met some folks from a startup Silicon Valley company called Omnicell, who had a technology solution for hospital supplies. That was my big break, and even today I am grateful to Omnicell for giving me the chance I needed to jump-start my career. My position was Project Manager, but since this was a startup, I ended up doing just about everything. I traveled constantly all over the country implementing supply management systems for hospitals, nursing homes, and various other healthcare facilities. I would setup Windows servers, install software, troubleshoot hardware, perform database maintenance, train users, and present the product to customers. When I visited the company headquarters in Palo Alto, I met some of the smartest and most innovative technical people in the world.

After about 4 ½ years, the travel began to wear on me, so I moved to Seattle and found a job with a local company called IDX Systems, who later was acquired by GE Healthcare. In that job, I implemented and supported healthcare interfaces, and various other solutions for large healthcare systems. In the summer of 2000, I yielded to the call of the dot-com boom and went to work for a shopping/e-commerce company. That lasted about seven months when the dot-com bubble burst. The company I was with quickly went into free fall, and for the first time in my life, I was laid off. At this point, I still wasn’t sure if I wanted to get back into Healthcare IT, but my previous employer IDX was eager to rehire me. That’s when I realized that this industry really is one of the best to be in, and from that point on, I decided that I would spend the rest of my career in Healthcare IT in one form or another. I have since pursued various certification courses on the side, including a Project Management course through the University of Washington.

My story is evidence that a guy with average intelligence and a lot of drive can break into Healthcare IT, and continue to move forward to find new opportunities and challenges.

In 2008, I left GE Healthcare to work for a Seattle area hospital, where I implemented an EMR from McKesson, then joined the project that implemented Epic for the entire health system. Then at the end of 2015, my family and I moved to North Carolina. I joined a local hospital supporting several Epic modules.