Medical Information Technology, Inc., commonly known as MEDITECH, is a Massachusetts-based software and service company selling information systems that are installed in health care organizations.  The company was founded in 1969 by A. Neil Pappalardo, Morton E. Ruderman, Curtis W. Marble, Jerome H. Grossman and Dr. Edward B. Roberts. This post provides the MEDITECH company profile as well as an overview of MEDITECH products.

Prior to founding MEDITECH, A. Neil Pappalardo and Curt W. Marble developed MUMPS (Massachusetts General Hospital Utility Multi-Programming System) technology on a DEC PDP at Massachusetts General Hospital from 1964 to 1968.  Also known as M, MUMPS had not been standardized yet and its evolution took two different directions: 1) the ANSI and ISO-standard language; and 2) the proprietary MIIS which is the basis of the system now known as MEDITECH. In 1969, Pappalardo purchased a DEC PDP-9, leased some office space in Cambridge, and began development of MEDITECH Interpretive Information System (MIIS).  MEDITECH began developing with the MAGIC programming language in 1977 and MAGIC became the proprietary language and operating system upon which MEDITECH’s health care information systems were implemented.

In 1994, the company adopted the use of Client/Server architecture as its second software platform.  Client/Server utilizes the same programming language, MAGIC, to run all the code on a central server, but the code is executed on users’ PCs acting, essentially, as dumb terminals.  Client/Server supports Microsoft Windows as well as Citrix systems.

In 2008, MEDITECH released its new generation of technology: 6.0 platform, with subsequent releases of its 6.x platform since then.  6.x is also based on Client/Server architecture.
MEDITECH’s most recent product, Web EHR, is a mobile, web-based solution which is a clinically-integrated healthcare solution meeting the needs of large IDNs, small critical access hospitals, and everything in between. Today, MEDITECH’s solutions can be used on a variety of mobile devices as well as PCs.

In 2007, MEDITECH acquired its long-time software partner Patient Care Technologies, Inc. (PtCT), as a wholly owned subsidiary.  In 2010, PtCT was fully merged into MEDITECH and no longer exists as a separate entity.  PtCT’s products are now part of MEDITECH’s HCIS, and includes three offerings: Home Health, Hospice, and well@home Telehealth.

In 2011, MEDITECH acquired its long-time ambulatory software partner LSS Data Systems (LSS), also as a wholly owned subsidiary.  At that time, MEDITECH and LSS had been partners for nearly three decades, and LSS’s practice management and electronic health records applications were built to be compatible with MEDITECH’s hospital systems.  LSS Medical and Practice Management software is now offered as MEDITECH’S ambulatory solution for MAGIC, Client/Server, and 6.0 customers.

MEDITECH has a very large and active user community which began meeting informally in 1981 and was formalized two years later into the Medical Users Software Exchange (MUSE).  According to the group, MUSE supported “healthcare organizations using MEDITECH developed software and technologies, by providing a user-driven networking environment conducive to learning–where ideas are exchanged and information is shared so that our members can continually improve organizational performance.”  Led by volunteers, MUSE hosts both regional and national U.S., as well as international, conferences.

Donna Carroll
VP, Professional Search & Health IT Consulting at Systems Personnel
Donna has been a Health Technology Recruiter for over 20 years, and places top-performing Health IT and Healthcare Software professionals across the United States in both permanent and contract opportunities. She can be reached at Donna@CarrollSearch.com. 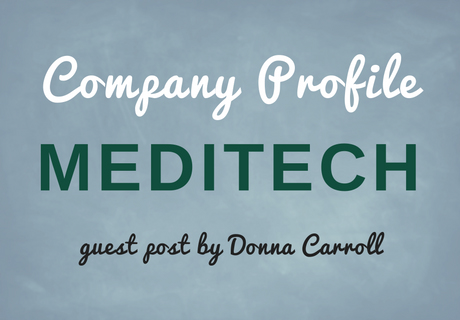